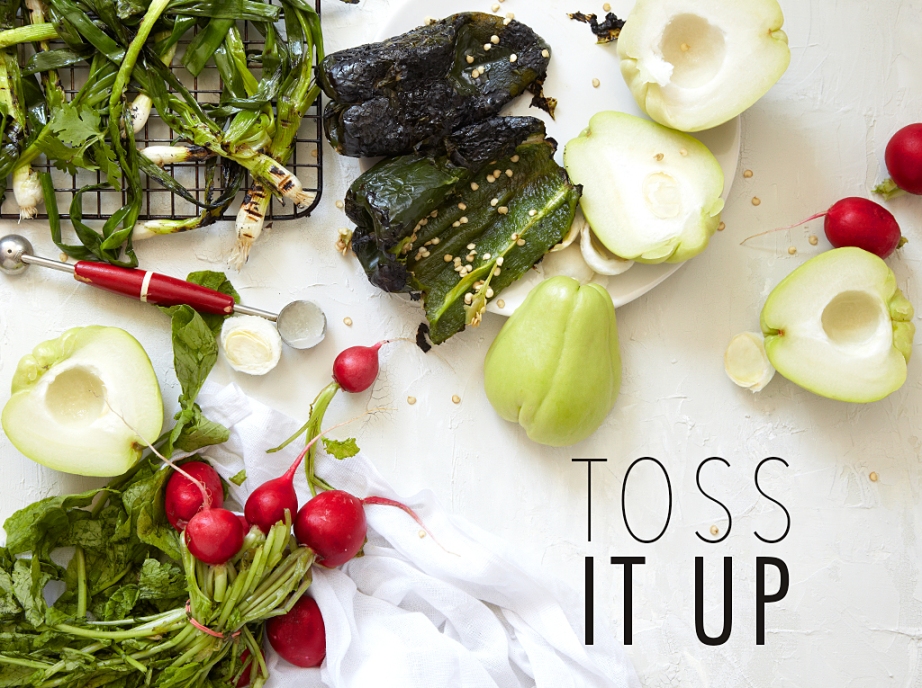 I have been remiss… It always happens that I get bulldozed with work and other distractions and I allow the blog to gather dust, much to the more diligent Tara’s annoyance. This post, along with a surprise guest-starring one coming up soon, begs to be paid attention to as the summer goes bipolar between summery hot flashes and incoming fall’s feverish chills.

This salad is actually something I hope to drag into the cold with certain variations in ingredients – it’s a salad that leaves those plastic bowl, carry-out, romaine chopped things in the dust with a robust smoky backbone of flavor. Oh, and, granita! I make a lot of granitas, for desserts and cocktails mostly, but a few months ago at one of my favorite restaurants (Blood & Sand in St. Louis) I had a lovely English pea and pea shoot tangle topped with a buttermilk frost that was divine in a very delicate sort of way.

This granita is salty lime and mint, and melts into the salad and its drizzle of olive oil for a refreshing and surprising twist on vinaigrette. Look out for some MacGyver action in this recipe, too: grilling, indoors!

– Stir 1 cup water and lime juice together in an 8- by 8-inch metal baking dish or other similar-sized vessel.

– Bring the remaining ½ cup water, sugar, mint, and ½ teaspoon salt to a boil over medium-high heat, stirring until the sugar is completely dissolved.  Stir mixture into the lime mixture and adjust seasoning to taste.

Place dish in the freezer and scrape with a fork once every 45 to 60 minutes, until mixture is completely frozen and has the consistency of a slushy. Reserve in freezer until needed.

– Peel the chayotes, cut them in half, scoop the seed out with a metal 1-teaspoon measure or melon baller, and cut into thin matchsticks. Prepare an ice bath by combining 3 cups of ice and 3 cups of cold water in a large bowl. Set up a strainer in the sink. Bring a large bot of salted water to a boil over high heat. Add the chayotes and cook for 2 minutes. Drain them and immediately plunge them in the ice bath. Once cool, drain them again. Line a baking sheet with paper towels and spread chayotes out in an even layer to dry.

– If you have a gas stove, char the poblanos over an open flame, turning with tongs occasionally, until their skins are black and blistered. Wrap them in foil and allow to cool about 10 minutes. Remove the stems and tear out and discard the ribs and seeds, then slice the poblanos thinly (lengthwise), and place them in a large bowl.
If you don’t have a gas stove,  heat a large dry skillet or cast iron skillet over medium-high heat. Cook the poblanos until black and blistered and follow steps above.

– Again, if you have a gas stove, toss the scallions with olive oil, then lay them on a metal gridded cooling rack over an open flame and cook them until charred. Otherwise, cook them in the same skillet as the poblanos. Transfer them to a cutting board, trim off and discard the root end, then coarsely chop and transfer to bowl with poblanos.

– Add the radishes, cheese, and cilantro and toss to combine. Season to taste with salt and drizzle with olive oil.  Plate the salads and top with granita. Enjoy immediately.